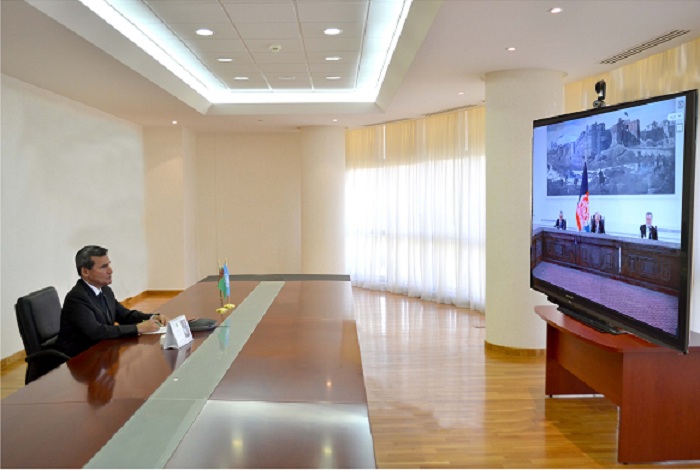 On the 23rd of November 2020, a two-day 2020 Afghanistan Conference has started in Geneva in the online format under the chairmanship of the Governments of the Islamic Republic of Afghanistan and the Republic of Finland jointly with the United Nations.

The given Conference has united the high-ranking representatives of more than 100 countries and international organizations.  Turkmenistan is represented at the Conference by the Deputy Chairman of the Cabinet of Ministers, Minister of Foreign Affairs of Turkmenistan R. Meredov.

The Conference stands as an efficient mechanism and active platform for the discussion by the international community of the overall recovery of Afghanistan and unification of efforts in the process of socio-economic development of the country.  The matters of peace and security are in the focus of discussions.

Speaking at the High-level meeting in the framework of the Conference entitled the “Regional Cooperation on Afghanistan,” R.Meredov noted that Turkmenistan attaches great importance to the overall reestablishment of Afghanistan and strives to contribute to the international efforts aimed at the strengthening of statehood, economic integration and well-being of the people of Afghanistan.  He added that Turkmenistan makes concrete practical steps in this regard.  The cooperation of two neighboring countries is based on large projects and programmes of socio-economic and humanitarian scope.

It was stated that being aware of the importance of such sectors of economy as energy, transport and communications for the overall development of Afghanistan, Turkmenistan actively works on the promotion of a number of large-scale international infrastructural projects.  The commitment of the Turkmen side to the advancement of the construction of the gas pipeline TAPI, power and fiber-optic communication lines on Turkmenistan-Afghanistan-Pakistan route, building of the railway lines from Turkmenistan to Afghanistan was underlined.

Turkmenistan actively develops partnership with Afghanistan on a wide range.  A lot of Afghan students are studying in Turkmen institutions of higher education, while those who already completed their studies, work in various state entities of Afghanistan, thus making an input into the development of the country.

All of this was presented as an example and call for strengthening of multifaceted cooperation in support to Afghanistan which is firmly moving forward to the peace, stability and sustainable development.

Glen Gilmore – Turkmenistan has much to offer visitors

To cooperate with Turkmenistan and Mir Television Company