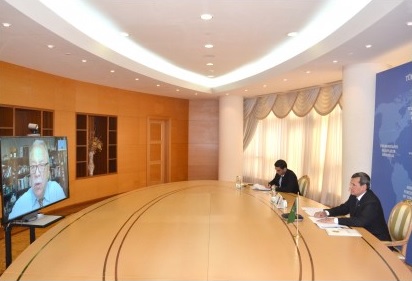 On June 21, 2022, an online meeting was held between the Minister of Foreign Affairs of Turkmenistan Rashid Meredov and the Executive Secretary of the UN International Center for Transport Diplomacy (ICTD) Igor Runov.

During a constructive conversation, the parties discussed a wide range of issues of interaction aimed at improving the interconnectedness between countries by improving the transport infrastructure in the country and in the region.

The head of the Turkmen Ministry of Foreign Affairs confirmed that Turkmenistan continues to strengthen the legal and logistical base of transport and transit corridors, in particular the Lapis-Lazuli corridor, the transit corridor of the Ashgabat agreement (Uzbekistan-Turkmenistan-Iran-Oman), transport arteries within the framework of the two seas initiative “Caspian Sea – Black Sea” and other interregional transport bridges in the directions “East-West” and “North-South”.

It was emphasized that in January 2022, Turkmenistan adopted the Program for the Development of the Country’s Transport Diplomacy for 2022-2025, which, in particular, provides for strategically important measures aimed at the comprehensive modernization of the material and technical base of all types of transport in Turkmenistan and further strengthening the country’s position as a regional center of international transport and transit corridors.

The parties also discussed preparations for the International Conference of Ministers of Transport of Landlocked Developing Countries, scheduled to be held in Turkmenistan in August 2022.