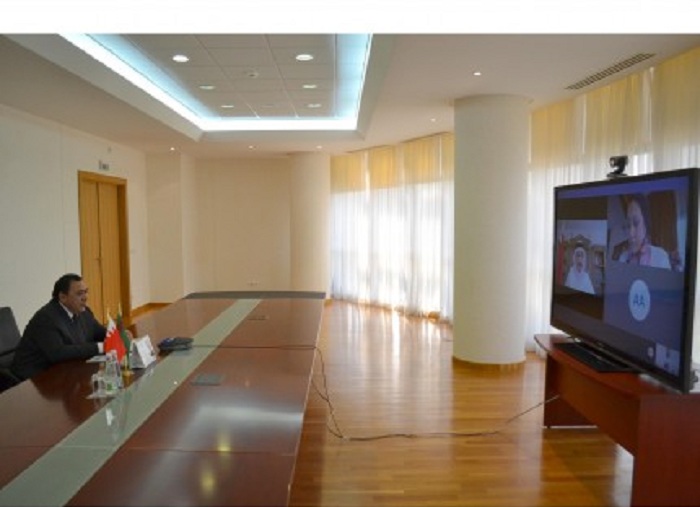 On July 22, 2020, meeting of the B.Matiyeev Deputy Minister of Foreign Affairs of Turkmenistan with the Deputy Foreign Minister of the Kingdom of Bahrain for International Affairs, Sheikh Abdulla bin Ahmed bin Abdullah Al Khalifa was held in the format of a videoconference.

During the meeting, the parties discussed topical issues of bilateral cooperation in the political, trade, economic, cultural and humanitarian fields. Diplomats noted the importance of bilateral contacts at the highest level and active interaction between the foreign ministries. The parties noted the importance of inter-parliamentary interaction and the possibility of their expansion.

The importance of the foreign policy of Turkmenistan on the basis of the country’s neutrality status was emphasized, which makes a significant contribution to maintaining stability, security and economic growth in the region. The parties noted the positive experience of cooperation within the framework of international organizations, in particular the UN. Special emphasis was placed on the implementation of the agreements reached in the course of consultations between the heads of foreign affairs agencies of Turkmenistan and Bahrain, which were held in July of current year.

Diplomats especially noted the importance of the Joint Intergovernmental Turkmen-Bahrain Commission for Economic, Trade and Scientific-Technical Cooperation. In this regard, the possibilities of expanding cooperation between the business circles of two countries were considered, including the attraction of investments, holding business forums and developing partnerships in the oil and gas industry.

Cooperation on the human rights

Telephone conversation between Turkmenistan and the UAE