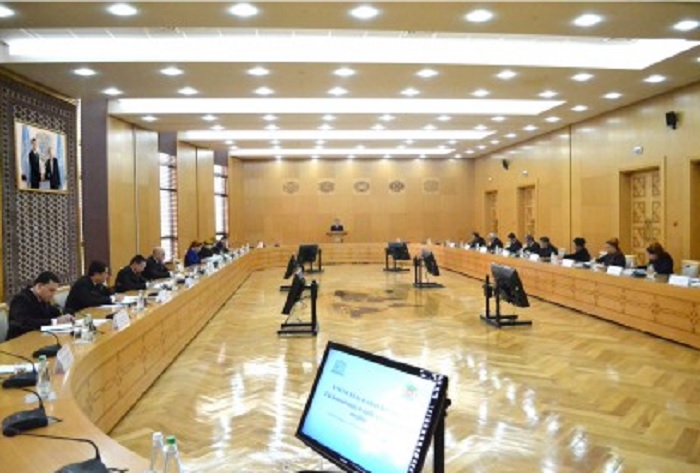 On April 23, 2022, a regular meeting of the National Commission of Turkmenistan for UNESCO was held in the building of the Ministry of Foreign Affairs of the country.

The meeting was attended by Deputy Chairpersons of the Cabinet of Ministers of Turkmenistan, heads and representatives of relevant ministries and departments of the country.

During the meeting, the main aspects of the development of relations between Turkmenistan and UNESCO were discussed. In particular, the issues of intensifying ongoing work on the nomination of primordially Turkmen arts in the UNESCO Representative List of the Intangible Cultural Heritage of Humanity, expanding the legal framework for cooperation and intensifying interaction in the field of digital technologies were considered.

Opening the meeting, Deputy Chairman of the Cabinet of Ministers, Minister of Foreign Affairs of Turkmenistan R.Meredov emphasized the need to further expand cooperation with this Organization and improve the efficiency of the National Commission of Turkmenistan for UNESCO.

It was informed about the progress of work to strengthen the country’s cooperation with this Organization. The importance of the nomination to the UNESCO Representative List of the Intangible Cultural Heritage of Humanity of the Akhal-Teke horse breeding and breeding of the Turkmen Alabai was noted. The importance of accession of Turkmenistan to the UNESCO conventions, including the Convention “On measures aimed at prohibiting and preventing illegal import, export and transfer of ownership of cultural property” was also emphasized.

In addition, issues on the inclusion of the city of Ashgabat in the UNESCO Global Network of Creative Cities in the creative field “Design” were considered, as well as organizational issues of creating UNESCO chairs in a number of higher educational institutions of Turkmenistan were discussed.

Issues of cooperation between Turkmenistan and ESCAP discussed