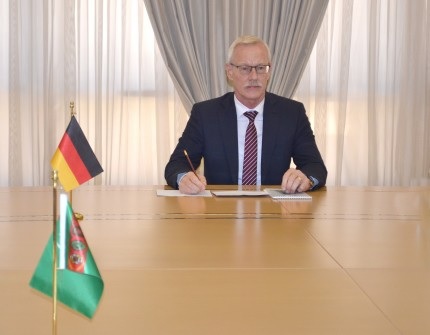 On August 23, 2022, the meeting of the Minister of Foreign Affairs Rashid Meredov with the newly appointed Ambassador Extraordinary and Plenipotentiary of the Federal Republic of Germany to Turkmenistan Michael Uwe Bierhoff was held at the Ministry of Foreign Affairs of Turkmenistan, during which the Ambassador presented copies of his credentials.

During the meeting, the parties discussed key aspects of Turkmen-German relations in the political, trade-economic and cultural-humanitarian spheres. They noted the important role of high-level visits in strengthening bilateral ties, as well as the effectiveness of regular consultations between the foreign ministries of the two countries.

Speaking about the development of economic ties, the diplomats stressed the importance of the joint Turkmen-German Working Group on economic cooperation and considered the possibilities of developing trade relations between the countries. The positive experience of interaction in the field of healthcare was also noted, the need to strengthen consultations between specialists in the field of medicine was emphasized.

Thanking the Turkmen side for the wishes in connection with the appointment to a high diplomatic post, the German Ambassador to Turkmenistan expressed hope for further strengthening of Turkmen-German relations.