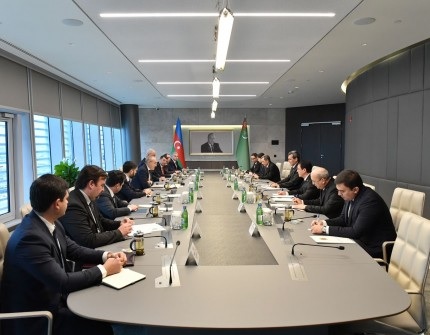 On December 5, 2022, Deputy Chairman of the Cabinet of Ministers, Minister of Foreign Affairs of Turkmenistan Rashid Meredov arrived in Azerbaijan on a working visit.

During the visit, the Vice Prime Minister, Minister of Foreign Affairs of Turkmenistan was received by the President of the Republic of Azerbaijan Ilham Aliyev.

During the meeting, Rashid Meredov conveyed warm greetings to the Azerbaijani leader from the President of Turkmenistan Serdar Berdimuhamedov and the Chairman of the Halk Maslakhaty of the Milli Gengesh of the country Gurbanguly Berdimuhamedov.

During the conversation, it was noted that friendly and fraternal relations between the two countries are successfully developing in various fields, including trade, economic, transport, cultural and humanitarian. There was also an exchange of views on the prospects for cooperation.

The importance of the visit of President Ilham Aliyev to Ashgabat in June 2022 to participate in the sixth Summit of the Heads of the Caspian States and the meetings held during the visit with the President and Chairman of the Halk Maslakhaty of the Parliament of Turkmenistan in the development of bilateral relations was emphasized.

On the same day, the Deputy Chairman of the Cabinet of Ministers, Minister of Foreign Affairs of Turkmenistan Rashid Meredov met with the Minister of Economy of Azerbaijan Mikayil Jabbarov.

The head of the Foreign Ministry of Turkmenistan said that on December 14, 2022, the first trilateral summit of the heads of state in the Turkmenistan-Azerbaijan-Turkey format will be held in the Avaza National Tourist Zone. The day before, on December 13, three parallel ministerial meetings will be organized: a meeting of foreign ministers, a meeting of transport ministers, and a meeting of energy ministers of the three countries.

It was also noted that on December 11, 2022, Ashgabat will host the international conference “Dialogue is a guarantee of peace”. The Turkmen side expects the participation of the Azerbaijani side at a high level.

In January 2021, the two countries signed a Memorandum of Understanding on joint exploration, development and development of the Dostluk hydrocarbon field in the Caspian Sea. In the development of this document, bilateral consultations at the level of working groups on the preparation of an appropriate intergovernmental agreement continue.