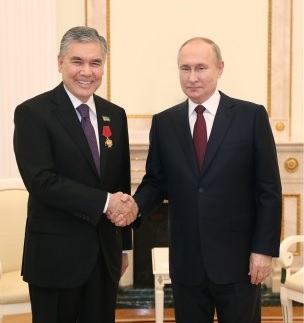 On November 3, in the afternoon, the motorcade of the Chairman of the Halk Maslakhaty of the Milli Gengesh arrived at the Kremlin Palace, where President of the Russian Federation Vladimir Putin cordially welcomed Gurbanguly Berdimuhamedov.

During the conversation that followed, a wide range of topical issues of Turkmen-Russian cooperation, which is successfully developing today in a wide range of areas, was discussed.

Welcoming the distinguished guest, President Vladimir Putin noted that he was very glad to see Gurbanguly Berdimuhamedov in a new capacity, not in the way they had worked together for many years.

Noting the high results achieved in previous years, the President of Russia stated with satisfaction that this dynamics is not decreasing with the arrival of the new President, Serdar Berdimuhamedov, with whom good personal relations have also been established, interstate ties are developing very actively.

In this regard, confidence was expressed that the policy of Turkmenistan in the Russian direction would continue in the traditional way.

Then, the ceremony of awarding the Chairman of the Halk Maslakhaty of the Milli Gengesh of Turkmenistan Gurbanguly Berdimuhamedov with the Order of Merit for the Fatherland, IV degree, took place.

The host reads out the relevant Decree of the President of the Russian Federation.

In a solemn atmosphere, President Vladimir Putin attaches an Order to the chest of the Chairman of the Halk Maslakhaty of the Milli Gengesh of Turkmenistan.

Thanking the Russian leader for awarding the high state award of the Russian Federation – the Order of Merit for the Fatherland, IV degree, Chairman of the Halk Maslakhaty of the Milli Gengesh stressed that this is a great honor for him and, in general, a historical, significant day, which few people have.

The honorary award awarded to the Hero-Arkadag for his great personal contribution to strengthening the strategic partnership between the two countries has become a sign of respect for Turkmenistan, which is firmly committed to the development and strengthening of ties of brotherhood, good neighborliness and cooperation with Russia.

U.S. Government Enters into Memorandum of Understanding on Healthcare Cooperation with Government of Turkmenistan